Is diamond mining in South Africa being mined sustainably so it can be used in the future. 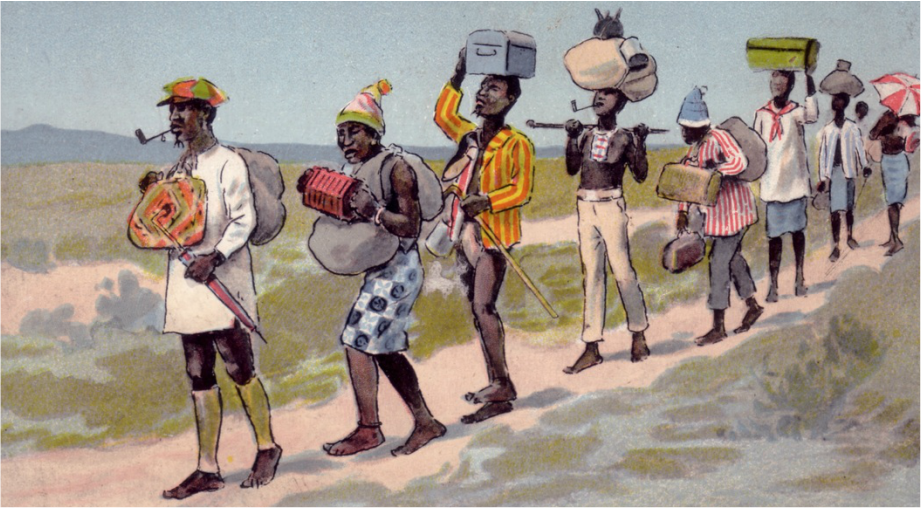 'On the way home from the mines', from a series of postcards, circa 1900, titled 'Sketches of South African Life' This is based on people heading home from the Kimberley mine.

The hours are irregular and long, even up to 14 hours per day

Although diamonds mining in South Africa is not currently socially sustainable some things are being done to try and make it sustainable. Some things that are being done to minimise the impact of mining on the cultural environment is a South African law that states that, “It is a criminal offence to employ a child under the age of 15, unless you have a permit from the Department of Labour. It is also illegal to employ a child from the age of 15 – 18 if the work is inappropriate or puts them at risk.” This is minimising the impact on the society as there are consequences for not following the law, and this law means that the mining companies must not hire children or any young adults if harm is going to come to them. Another thing that is being done to minimise the impact that diamond mining has on the South African cultural environment is that the De Beers diamond industry has set up a program where men who have come from other states who are often very tired from their journey are given at least 2 weeks rest at the expense of the De Beers. These two things that the diamond mining industry has done will help the South African cultural environment to be a little bit more socially sustainable into the future.


Although the diamond mining industry have done a few things to help social sustainability there is still many more things that they can do to further minimise the impacts in the future. To fix the increased violence made by long irregular hours, the mine could make more stable contracts that fully specify hours that the laborers can work at so that their jobs are more stable. This is socially sustainable, as since their jobs will be more stable the amount of family violence and abuse due to irregular hours will decrease. To fix the deaths caused by lack of equipment and poor health and safety systems, they De Beers industry could spend a little more money to invest into some more safety equipment for the more deadly jobs, while also investing money into new ideas for safety systems. This is socially sustainable because a lot less people will be injured or killed while working. I think that there needs to be a policy on how much the mine can pay the workers and there should be a minimal amount that the workers should get that is enough to sustain them in their daily lives. This is more socially sustainable because it allows the people to be able to live off the money that they are paid and to be in a little bit less of a difficult position and they will be able to but more of their necessities. I also think that trying to locate and shut down the illegal mines in South Africa should be a higher priority. This will improve socially sustainable and minimise impacts as hundreds of miners in Angola will be safer and have a more stable job, they will also get more pay and decent working condition. I think that if the South African diamond industry can follow these ideas. If they did then the impact of the diamond industry on South African socially sustainability would definitely be minimalized and more sustainable for the future.
Powered by